Paul has reasons to be cheerful after double knee replacement

There are three good reasons why film maker and fitness enthusiast Paul Eden is glad he had knee replacement surgery on both knees – less general discomfort, less pain after exercising and a greater ability to do more activities again.

Sixty-five-year-old Londoner Paul, who lives on Wandsworth Common, had suffered from pain in his knees since he was in his mid-thirties. A keen sportsperson who had run almost every day since being a teenager, he expected there to be natural wear and tear. Over the years he had suffered from torn meniscus in both knees and had arthroscopies as a result.

He said: “I knew that if I continued to do sport there would probably be a price to pay. About five years ago I went to see two surgeons and complained about discomfort and decreasing mobility. My ability to do what I like doing – walking, running, playing tennis and badminton – was also decreasing. The quality of my life was declining considerably. The surgeons said that there was damage, but that it was too soon to do anything about it.”

Then at the end of 2019 Paul was referred to Fortius Consultant Knee Surgeon Mr Giles Heilpern who, after seeing Paul’s scans, decided it was time to act.

Giles said: “Paul’s osteoarthritis had got worse. He was increasingly stiff and becoming less mobile. It was also uncomfortable for him when he was sitting down or sleeping or if he was on an airplane or driving. I suggested he had both knees done at the same time and he agreed.”

Unfortunately, Paul had to wait another five months for his operation because of the COVID-19 pandemic but finally in August 2020 he had a bilateral simultaneous unicompartmental knee replacement on both knees at the Fortius Joint Replacement Centre at Cromwell Hospital.

Paul said: “I trusted Giles so much. He advised that if I’d got to go through this, why not do both knees at once, rather than having to go through it all over again. He encouraged me to be bold and he was realistic in managing my expectations.”

The operation was performed using highly advanced robotic technology which enables surgeons to have a more predictable surgical experience with increased accuracy. Having Mako robotic assisted surgery results in shorter recovery times and reduced post-operative pain helping patients get back to doing what they love.

Paul was in hospital for five days and had to take medication for the pain when he returned home. After two weeks he began to see a physiotherapist. At this point he was walking for a kilometre unassisted and by six weeks he was walking 3km unassisted. Paul had follow-up consultations with Giles over the phone and at Fortius Clinic Wimbledon. After three months, Paul was walking 10km but finding it hard work and felt that he should be getting better quicker than he was. He made an appointment to see Giles.

“I had some more scans but there was nothing wrong and Giles advised me to be patient,” said Paul. “After my consultation with Giles, I felt I had turned a corner. I continued to walk but it hurt less, and so I resumed singles badminton. I began to feel better and better. It’s hard to hold your nerve and be patient, but I was encouraged to, and that combined with diligent physio eventually yielded results.”

Paul went from strength to strength and celebrated his recovery and the 12 month anniversary of his operation by climbing three summits in the Mount Olympus range in Greece over a four-day hike. He has even started running again – which is the first time in eight years.

“I was enormously impressed not just by the helpfulness of Giles and his team but by the speed they responded to any of my requests for help,” said Paul. “I was also impressed with the way Giles co-operated with my physiotherapist who referred me.” 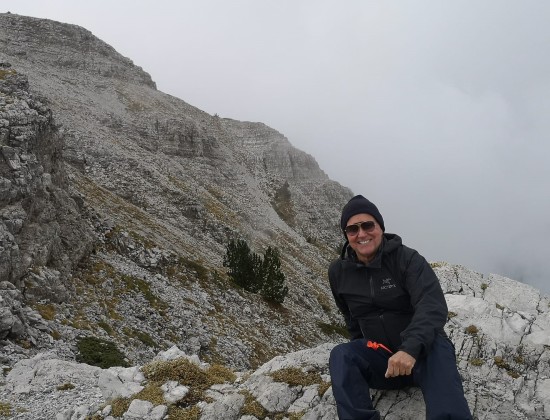 Fill in your details below to make an enquiry