Ivor is back in the game after knee replacement

As a lifelong fan and Commercial Director of League One football club AFC Wimbledon, Ivor Heller is used to facing challenges but that didn’t make the difficulties he has experienced since damaging his knee any easier.

Ivor, who is 58, had a motorbike accident when he was 17 years old and smashed his left kneecap. After an operation to repair it, the doctors said he would need another operation after about 20 years.

Despite having problems, it wasn’t until around 30 years later that Ivor decided to have a consultation to find out what could be done about his knee. He was advised to leave it as long as he could before having a knee replacement.

He said: “I took the advice to heart for a long time but about a year ago I started to realise I needed to do something about my knee. I knew I needed a new one but wanted to do it in my own time. Then one day I stupidly attempted to run a little and played golf twice. I was at a friend’s house and it felt like my knee collapsed. It was a weird feeling and I was in agony.”

Ivor made an appointment to see Consultant Knee Surgeon Jonathon Lavelle at Fortius Clinic in Wimbledon. Following an X-ray, Jonathon confirmed that Ivor had osteoarthritis, that his knee was unstable and swollen and advised that he had a total knee replacement.

“I felt very relaxed about getting a diagnosis and seeing Jonathon. From the moment I walked into the clinic I felt that I was in the right hands. It was quick and there was no messing around which is what I wanted,” said Ivor.

Ivor had his operation at the Fortius Joint Replacement Centre at Cromwell Hospital in October 2021. He was in the hospital for three nights and felt very looked after, although it was upsetting that he couldn’t have visitors due to the COVID 19 pandemic.

After having physiotherapy in hospital, he felt quite confident going up and down the stairs once he was at home. Initially a physiotherapist from AFC Wimbledon came to Ivor’s house to treat him and following this he went to see another physiotherapist three times a week and had aqua physio.

Jonathon said: “Prior to the surgery Ivor had a very stiff and deformed knee. His knee is much more stable now and as a result of his diligence with his rehab programme his flexibility continues to improve. The more flexion he can regain the easier he will find day-to-day activities.”

Ivor is continuing to have physiotherapy to increase the mobility in his knee and after suffering pain at night for months, is at last feeling better. He no longer needs crutches, has gone back to work and is hoping to go to the driving range very soon.

He said: “Everything is going in the right direction and I feel like I can get back to normal life. I’ve started driving properly again now. I wasn’t able to do long journeys in a car but I was able to drive there and back to our away game on Saturday with no problem. It’s great to be back and I think everyone is pleased to see me back.”

Fortius Clinic is the health and wellbeing partner for AFC Wimbledon. 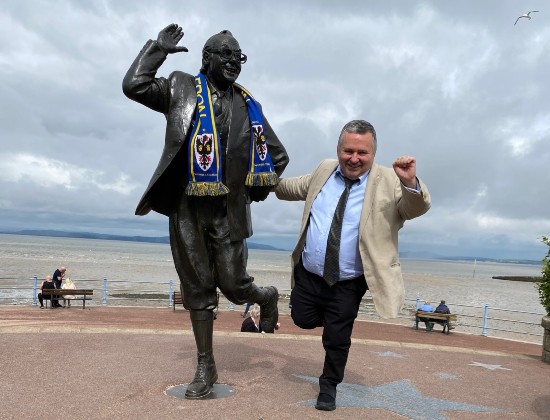